We were thrilled when we were contacted by Professor Kumar of Tufts University, Cummings School of Veterinary Medicine, Medfore, MA with a request for the above photo of our cat "Snowball" aka "Angel" (Flehman Reaction) to be included in the veterinary textbook he was in the process of writing.  His book was published in September 2012.  "Snowball" aka "Angel" can be found on Page 516.  This book is available for purchase at Linus Publications.

Clinically Oriented Anatomy of the Dog & Cat
by M.S.A. Kumar

This is the first clinically oriented textbook in the field of Veterinary Anatomy. This textbook emphasizes the importance of anatomy for clinical applications and includes in-depth description of basic anatomy of the dog, and where applicable, significant anatomical differences in the cat are noted and illustrated. Click here to see the Book Flyer. 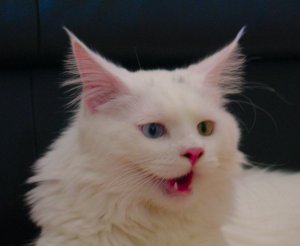 Cats do not normally pant as much as dogs do unless they are extremely overheated, stressed, or in labour. When they are panting heavily, it means they are overheated and should be calmed down and placed in a cool place.

Most of the time what cat owners may perceive as panting is really another type of behavior called the Flehman Reaction. When a cat smells something it is interested in or something extremely pungent, it may curl back its lips and open its mouth to further investigate the scent. What your cat is doing is tasting the smell it has detected. This is completely natural behavior and no cause for alarm. All cats do this; even the big (lions and tigers) cats do it. It's a reaction to certain smells that causes an autonomic breathing response. Cats have a keen sense of smell, but it's not all in their noses.

When your cat smells something and then opens his mouth slightly, wrinkles his nose, and curls back his upper lip, your cat is exhibiting what is called the 'flehmen reaction' or 'flehming.' He is drawing in air, capturing the scent, and transferring it to a small specialized sac called the 'vomeronasal organ' or 'Jacobson's organ.' This organ is located high up in the roof of the mouth, and has a large blood supply. It traps the odor molecules and sends signals to the brain regarding the scent allowing for a keener sense of smell. Flehming can occur with a number of scents, but most frequently occurs when the cat smells urine. Many male cats will exhibit this behavior when they smell the genitals or urine of a female cat in heat.b Jacobsen's Organ is used not simply for scent detection, but also for subtle communication between other members of the same species, through the emission and reception of chemical signals called pheromones.

The vomeronasal (or Jacobsens' Organ) is used to distinquish scents a cat, ( even the big lions, etc.) finds interesting but not necessarily unpleasant. The best way nature allows molecules to be translated into smells is when the feline opens its' mouth to further inhale deeply & rapidly at first, with a pause sometimes while the organ & brain sort information. Could be another cat, dog, human or an intruder on its' territory.

The vomeronasal organ (VNO), or Jacobson's organ, is an auxiliary olfactory sense organ that is found in many animals. It was discovered by Ludvig Jacobson in 1813.

During embryological development, it forms from the nasal (olfactory) placode, at the anterior edge of the neural plate (cranial nerve zero). It is a chemoreceptor organ which is completely separated from the nasal cavity the majority of the time, being enclosed in a separate bony or cartilaginous capsule which opens into the base of the nasal cavity. It is a tubular crescent shape and split into two pairs, separated by the nasal septum. It is the first processing stage of the accessory olfactory system, after which chemical stimuli go to the accessory olfactory bulb, then to targets in the amygdala and hypothalamus.

The vomeronasal organ is mainly used to detect pheromones, chemical messengers that carry information between individuals of the same species, hence is sometimes referred to as the "sixth sense." The VNO has two separate types of neuronal receptors, V1R and V2R, which are seven-transmembrane receptors that are coupled to G proteins. The receptors are distinct from each other and form the large family of receptors in the main olfactory system. Evidence shows that the VNO responds to nonvolatile cues which stimulate the receptor neurons. Information is then transferred to the accessory olfactory bulb as well as other centres of the brain such as the anterior part of the hypothalamus.

Its presence in many animals has been widely studied and the importance of the vomeronasal system to the role of reproduction and social behavior (through influence on anterior hypothalamus) has been shown in many studies. Its presence and functionality in humans is widely controversial, though most studies agree the organ regresses during fetal development. (Source: Wikipedia.org) 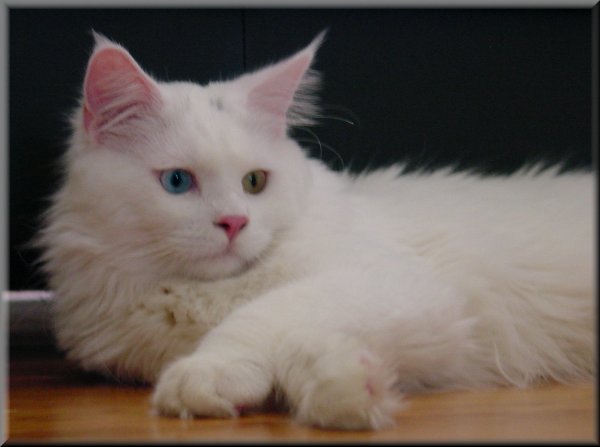